One of geology’s oldest brands is now owned and operated by a female geologist. Here’s the story of how that came about, in a garage.

RIVERTON, WY – NOV. 11, 2021 – Lauren Heerschap remembers the day she first learned how to use a Brunton pocket transit. She was 20 years old, at an outcrop of Cambrian sandstone in the Black Hills of South Dakota, and it was the first week of an eight-week undergraduate geology field camp. “I argued with my team for over an hour about how to measure strike and dip,” says Heerschap. “The sandstone bed was almost horizontal, and we couldn’t figure out how to do it.”

So began Heerschap’s journey with Brunton compasses, which she subsequently used for field work in Egypt and Taiwan for research, and then throughout the western US during a decade of teaching field methods and field camps. It was year seven or so of teaching field methods when she came up with the idea for a new pocket transit model that solved many of the issues she had experienced as a student. That idea was prototyped into reality by her husband, David Heerschap, in their garage over winter break.

David was also a science educator at the time and had just started a company called Real Science Innovations that offered home-made teaching tools and field equipment for science teachers and students. “Dave took my poorly-sketched ideas and turned them into three functional prototypes in our garage – the idea actually worked!” says Lauren. “For the final prototype, we ran out of aluminum, so Dave made a mini metal foundry and melted down old climbing carabiners for the block that he then milled. He also set up a home anodizing process with electrified acid baths and dyes. If someone had walked into our garage that winter, they would have thought we had gone mad!”

The prototyped model, called the Plane Sight Compass, was successful in doing what was envisioned – namely, simplifying the methods used to measure strike & dip, trend & plunge, bearings & vertical angles. Lauren and David patented the idea, tested it with field camps that summer, then approached Brunton in the Fall of 2014 about licensing the idea. “That was our ‘Shark Tank’ moment, walking into a room to pitch our idea to Brunton’s management,” says Lauren. “We showed them how our model worked compared to existing Brunton transit models, and they could see its benefits. They went for it right away.”

Two years later, the Axis transit was born – renamed and rebranded, with Lauren and Dave involved throughout the product development and rollout phases. The Heerschaps worked the Brunton booth for several geological conferences to help introduce the Axis and support the rest of the product line. They also uprooted from Durango, CO and moved to Lander, WY to be closer to Brunton’s manufacturing facility in Riverton. Their increasing involvement led to a job opportunity and career switch for David when the previous Brunton engineer of 40 years, Hank Iden, was nearing retirement. A few years later, in early 2021, Lauren also officially joined the Brunton team as Pro & International Sales Manager.

And that’s when things got interesting. The Heerschaps were approached by the previous brand management, who presented the opportunity to acquire the Brunton brand and all of its assets. “We had considered it before, but never thought it would be possible,” says David. “The previous owner was looking to sell to the right buyers, and he recognized that in us. You won’t find two people more passionate or knowledgeable about Brunton products than Lauren and me.” Through a fortuitous combination of a favorable offer from the previous brand owner and family investors, they are making the acquisition possible. “This has taken all year … 2021 has been a very long year,” says David.

“We’re honored and excited to be the new caretakers of a brand with a very long and rich heritage, both in Wyoming and in the broader professional and recreational communities,” says Lauren, who is now majority owner and CEO. “I am also proud to make Brunton a woman-owned, family-owned, geologist-owned Wyoming small business for the first time in its 128-year history. I’m pretty sure that combination hasn’t happened yet for Brunton until now.”

Brunton dates back to 1894 when the first pocket transit was invented by the Colorado-based mining engineer, D.W. Brunton. In 1972, a group of Wyoming businessmen brought the brand’s manufacturing headquarters to Riverton where the brand’s compasses, transits, and other outdoor navigation and measurement products have continued to be hand-made ever since. In 1996, the brand was acquired by the Swedish compass manufacturer Silva, followed by Fiskars (Finland) in 2007 and Fenix (Sweden) in 2010. Management was moved to Fenix’s North American headquarters in Colorado but production remained in Riverton. During the past 25 years of foreign ownership and leadership, Brunton’s product line expanded and contracted, often veering far off the original course of navigation-focused products.

Brunton’s new leadership aims to guide the brand back to its core products and values, with the goal of making the world’s best recreational compasses and professional transits. The Brunton brand is known and sold worldwide, especially in the geology community where a pocket transit of any model is simply called “a Brunton”.

“Bringing leadership and production together under one Riverton roof again will dramatically improve everything about our operations, and we’ll have the ability to invest in innovation, quality workmanship, and the people that make it all happen,” says Lauren. Several new full-time management and production positions are being created with the transition, with more jobs planned in the coming years.

“I never imagined I’d be in this position today,” says Lauren. “It’s fun to think back to that first day I tried to use a Brunton – I remember it like it was yesterday. Life takes us in a lot of unexpected directions, to use a cheesy compass metaphor. You can try to chart it out ahead of time, but all you really need is a good compass.”

The Geological Society of America is eager to continue working with Brunton under its new ownership. The company is an organizational partner that supports GSA’s annual meeting through sponsorship and an exhibit hall booth; provides demo fleets of compasses for some of GSA’s fields trips; and delights recipients of the J. David Lowell Field Camp Scholarships with personalized, engraved compasses. D.W. Brunton created the Pocket Transit Compass just six years after GSA was established; the now-indispensable compass maker and the 133-year-old geological society are a symbiotic pairing. With Brunton’s legacy of excellence in its gold standard instruments, and the Geological Society of America’s legacy of commitment to geoscience research, discovery, and stewardship, the two organizations share like values of steadfastness and distinction. In Lauren, GSA has a true partner with deep connections: she received a GSA graduate student research grant while working on her master’s degree, and participated in a GSA Penrose Conference in Taiwan. She became a student member of GSA in 2002 and has attended, presented, and worked at many GSA annual and section meetings since then. 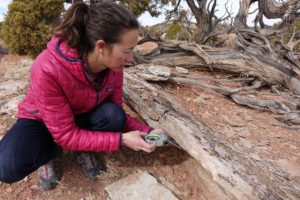 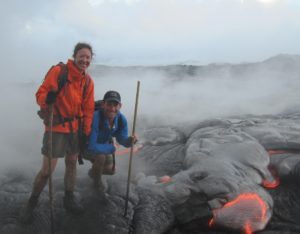 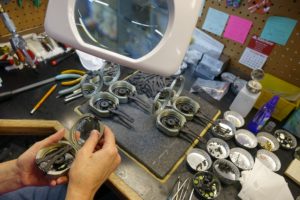