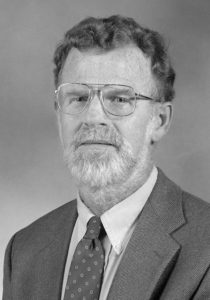 Jim Evans was the second Congressional Science Fellow (1987–1988) and is currently Professor Emeritus of Geology at Bowling Green State University.

The Congressional Science Fellowship is a very intense experience. You are working as a legislative assistant in one of three possible placements: in the personal office of a Member of the House of Representatives, in the personal office of a Senator, or in a Congressional Committee office. Each of these has certain differences and appeal. I chose to work in the personal office of Congressman Michael Lowry (D-WA), as his legislative assistant for science and the environment. In that role, I tracked legislation moving through different committees and found ways we could contribute (such as proposing amendments), tracked news items affecting the Congressman’s district, met with lobbyists (industry groups and environmental groups) and public interest groups (such as scientists and educators), wrote speeches and news releases, attended and helped organize hearings, and traveled to field hearings. You have to be able to work at a computer and phone in a crowded office with lots of things going on around you. You have to be able to multitask, be sufficiently organized that at any time you can hand off assignments to someone else, and be willing to deal with issues at short notice. It is about as different from a typical academia situation as can be found anywhere.

I have always had an interest in science, history, and politics. Prior to being GSA’s second Congressional Science Fellow, I had worked for the USGS, the Minnesota Geological Survey, The Nature Conservancy; been a consultant with environmental groups; been a delegate to a political caucus; and some of my research had policy implications (part of a larger project on micro-contaminants in Lake Superior). Throughout all this, I met many inspiring people who apply their scientific knowledge to the public good. It seemed a natural thing for me to apply for the Congressional Science Fellowship after completing my Ph.D.

Because this is a time-limited experience (one year) with a very steep learning curve, most of what I accomplished happened near the end of my time (note: when I say “I” this means that behind the scenes, I convinced the Congressman to advocate these things). I am very proud of three things: (1) I initiated a Government Accountability Office (GAO) investigation into the decision to not list the northern spotted owl as an endangered species, against all scientific evidence. The GAO investigation found evidence for knowing and deliberate violations of the Endangered Species Act by senior federal officials. The most important result was the successful listing of this species as “federally threatened,” which had the effect of protecting large tracts of old growth forest in the Pacific Northwest. (2) I initiated a study by the Office of Technology Assessment (OTA) about the technology needs (such as robotics) for cleanup of liquid high-level nuclear waste stored in tanks at defense production facilities such as Hanford and Savannah River. (3) I am responsible for a congressional earmark of $7 million to the Centers for Disease Control (CDC) for a three-year study on the effects of radioactive iodine exposure on civilians in the western United States (“the down-winders”), specifically the correlation to thyroid cancer rates. The radiation exposures occurred in the 1940s–early 1950s during the early phase of the Cold War. Our action was a response to requests from the affected population, who were being given misleading information by the Department of Defense. Some of the individuals involved, who had been stonewalled for years, actually started crying when we passed the funding to initiate this CDC study.

Many scientists in the United States are enormously privileged—able to follow their interests in developing research projects; benefiting from public funding in the form of grants and scholarships; and being given a certain level of authority and respect by the public in recognition of their skills, knowledge, and training. Not everyone is able to follow their dreams, including even senior scientists in certain other countries. I think it is critical that we come to recognize that these privileges should come with responsibilities. There are many ways to do this, but the Congressional Science Fellowship program is a direct way of making a contribution to our citizens in exchange for all we continue to receive.

What would you like to say to other people who give their time and resources to GSA?

I would say thank you. There have been many other GSA Congressional Science Fellows, and I have served on GSA committees with many dedicated and talented individuals. If my experience says anything, it is that these efforts have made and continue to make a difference in people’s lives.