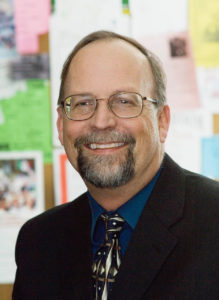 Lawrence Meinert was the 2010–2011 GSA-USGS Congressional Science Fellow and is currently Editor-in-Chief of Economic Geology, Affiliate Faculty at the Colorado School of Mines, and President of Meinert Consulting.

In a word, transformative. The Congressional Science Fellowship opened new vistas and capabilities that I would never have envisioned, nor thought was something I could do. It is without a doubt the most meaningful thing I have done in my professional career.

It was an opportunity born of being in the right place at the right time. I had relocated to Washington, D.C., because my wife was called to join the Obama administration, and although I knew about the Congressional Science Fellowship program, I never imagined it as something I could or would do. The opportunity to combine my scientific expertise with the political arena was transformative. It led to a new career with the U.S. Geological Survey in which my newfound skills were essential. Although I had touched many lives during my 30-year career as a geology professor, in the political realm I had even more influence, and I owe it all to GSA’s support of the Congressional Science Fellowship program.

Being part of the incredible network of present, former, and future Fellows. We collectively are helping to make America a better country. My small part was in helping to develop an awareness of the importance of mineral resources in general and critical minerals, such as rare earth elements, in particular. This led directly to presidential and secretarial orders that reshaped national policy.

The stated purpose of the Congressional Science Fellowship program is to inculcate scientific awareness and reasoning into the congressional process. But it works both ways. Congressional Fellows are transformed in their understanding of how the legislative process works, and it makes us better people as well as more effective scientists. In terms of “bang for the buck,” this may be the best of all uses of GSA Foundation funding.

First, thank you. And second, by participating in GSA activities you not only are making the world a better place but you just might find, as I did, that you will grow to be a better person.