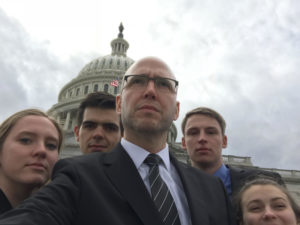 Like many organizations, GSA has been affected in this past year. Now more than ever, our Greatest Needs Fund is vital to sustain the very programs that define GSA and allow the Society to respond to those areas most impacted by changing circumstances. GSA leadership allocates the funds to increase student travel grants or research grant awards, for more On To the Future diversity awards, or to help fund the Congressional and Science Policy Fellows. Since GSA’s policy work remains a vital force for our science and our future, it is a program area that could benefit significantly from the Greatest Needs Fund.

Our policy staff take on a number of important items such as membership in working groups like Geopolicy and Climate Science; Geoscience Congressional Visit Days; and informing GSA members on current geoscience legislation. The policy office helps the community on a regular basis, such as facilitating our members’ support of bills that have been recently signed into law. Over the next several weeks, we will be sharing stories from those who have been involved with GSA’s policy work as a part of our ongoing Community of Support series. We will post a new story every Thursday through the month of June. Bookmark this page and check back weekly.

Make an immediate impact today! Support the Greatest Needs Fund by clicking DONATE at the top right and help provide flexibility for GSA to strategically apply resources where they are critically needed.

David W. Szymanski, Ph.D., is Associate Professor of Geology at Bentley University and was the 2008–2009 GSA-USGS Congressional Science Fellow.

The Congressional Science Fellowship was life-changing. While I went into the fellowship aiming to use our science in “service to society,” learning the process and politics in decision-making first-hand was transformative. The cultural divide between scientists and policymakers is enormous. After my year on Capitol Hill, I knew I had to focus on science communication and science education for non-scientists in order to help the next generation of leaders address the wicked problems of sustainability. And that has been the core of my professional work ever since.

After completing my bachelor’s degree, I went on to graduate school for both geology and forensic science, applying the analytical skills of a chemist essential to both fields. I cut my teeth in science communication testifying as an expert witness in court—convincing lawyers, judges, and juries that geology had a lot to say about the chemical composition of glass as trace evidence. The challenge of using science for the public good revealed other connections between geoscience and society. I was inspired to “scale up” my work and try science communication on the front-end of the system and help make the laws.

What I am most proud of from my time on the Hill was my work supporting my “boss,” Sen. Jon Tester (D-MT). I worked a portfolio of energy, climate, and environmental issues for the senator, and made sure he was prepared to walk into any meeting with the best scientific understanding of an issue—which could have been anything from forest fire appropriations to the efficiency of reactions in developing biofuels. At the same time, I learned the real value of science in policymaking, which is wrapped up in the competing interests of economics and public opinion. So, I’m also proud of how that time paid off for my students to this day. I’m preparing them to make a difference, armed with the same understanding.

Why should people support programs like the Congressional Science Fellow?

Programs like the Congressional Science Fellowship make such a difference; the dividends are orders of magnitude greater than the investment. By sending scientists to the Hill, we not only effect a positive change in the perception of scientists by lawmakers, but we also enable scientists to teach the two-way street of science policy to their colleagues and next generation of leaders.

It’s easy to see giving back to GSA as a contribution to the profession. But it is so much more than that. Giving is the opportunity to inspire. It’s the opportunity to change a life and change the process at the same time—and with an understanding of time and scale that only the earth sciences can provide. “Service to society” isn’t just part of our mission. It’s at the heart of our role as explorers, as educators, and as stewards of the Earth. Giving time and resources to GSA is the ultimate act of paying it forward.