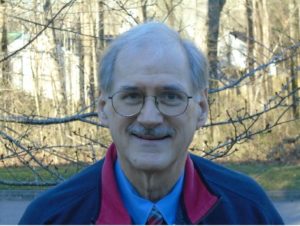 When I interviewed, Dr. Fisher at the University of Texas was one of the interviewers. Since the five previous GSA Congressional Science Fellows had moved from being on the staff of a congressional committee or on the staff of an individual Member of Congress, Dr. Fisher asked where I was planning to embed in the Congress. I indicated that I wanted to learn the legislative process and to focus on the hazards all Americans face from the natural environment—drought, landslides, earthquakes, tsunamis, hurricanes, flooding, etc.

I interviewed in several offices including that of Rep. Stokes, a member of the House Appropriations Committee, and Senator Harry Reid, a member of the Senate Appropriations Committee. I was interviewed by Ray Martinez, Senator Reid’s chief of staff. Ray had run Senator Reid’s first campaign—for student body president in high school! After talking with me for a few minutes, Ray excused himself and left me in his office alone. Less than three minutes later, the door opened and Ray introduced me to Senator Reid.

My full name is Kenneth Belk Taylor: Kenneth is from my mother’s younger brother’s name—Joseph Kenneth Ingram—and Belk is from my mother’s older brother—Thomas Belk Ingram. Uncle Joe was a Republican and Uncle T. Belk was a Democrat. They loved each other and argued and always discussed politics. When Uncle Joe was old enough to vote in South Carolina, he went to the county seat of Chesterfield. He asked for a voter registration card. He wanted a Republican Party voter registration card. This was in the early forties, when there were no persons registered with that party in that part of South Carolina. Joe insisted that he be registered and he was, with the word REPUBLICAN written in red pencil across his card. I saw it many years later, framed in his brokerage office.

I was a rock hound from the sixth grade onward. I always knew I wanted to be a geologist.

Senator Reid hated to wear glasses in the Senate Chamber. I watched his speeches from his office. I noticed that he had a cadence in speaking, so I proposed to Ray that we increase the font size of the text he was reading and let him use his natural cadence of speaking. For example, “Fellow Senators, I come to you today, [flip page] to talk with you about, [flip page] women’s health.”

I stayed in Senator Reid’s office after the fellowship ended and was picked up by the U.S. Geological Survey to help put on an international conference on Arctic contamination in Anchorage, Alaska. Our first daughter was born in Arlington, Virginia, and we moved to North Carolina a few months later, where I was employed by the State of North Carolina. That was 27 years ago.

Why should people support programs like the Congressional Science Fellow?

As a Congressional Science Fellow, my job was to be an unbiased, technical explainer of complex issues in an easy-to-understand and fully accurate way. There was NO spin, or feeding the Senator information that ran counter to years of his legislative work. To me that is what a scientist is supposed to do: Give the facts and explain the details in language everyone can understand. That is why people should support the Congressional Science Fellow program.

I salute ALL who help with their time and resources to the Geological Society of America. I will turn 64 this year. I joined GSA in 1977, around 44 years ago, when I was 20. I organized and ran the student assistants’ support at the 1989 GSA Annual Meeting in Saint Louis. I have also helped with a few of the GSA Southeastern Section Meetings. GSA has been a part of my life for decades. One of my colleagues from the American Association of State Geologists and one of my professors at the University of South Carolina, Dr. Robert D. Hatcher Jr. supported my elevation to GSA Fellow in 2018. GSA made these experiences possible.