… Wild, vast, Denali National Park, to be exact. We stood at the abrupt end of a gravel road, a chilling wind rolling up over its brink, staring across a tumbling mountainside a hundred yards to another precipitous edge where the road re-started. My mind needed time to make sense of the visual chaos in front of us before recognizing that the crumbled earth some forty feet below was, indeed, the missing stretch of roadway.

Park geologist Denny Capps and three of Denali National Park and Preserve’s interns were explaining the Pretty Rocks Landslide, its long history, and substantially increasing movement over the past eight years. In fact, the recent displacement has been severe enough to close the park road at its midpoint while extensive two-year plans are implemented to reestablish a safe road across the slide area.

Nicole Benshoff is focused on this and other landslides throughout the park during her internship, and Samantha Hilburn is working in science communications. Both are part of the Scientists in Parks (SIP) program—a partnership between the National Park Service (NPS), the Geological Society of America, the Stewards Individual Placement Program, and the Ecological Society of America. The program offers unique opportunities to work on current scientific needs in national parks, build professional experience, and foster the next generation of diverse natural resource stewards. Angela Fiorito is an intern in the NPS’s Mosaics in Science Diversity Program, a GIS assistant documenting historical aerial photos. With first-hand experience that positions are highly sought after and competitive, all three value the exceptional opportunities to apply their geology backgrounds to real-world, science-based work in Denali.

Nicole said, “So far my time at Denali National Park and Preserve has served as a foundational experience for government work and how geology would be incorporated. The hands-on experience with geohazards, monitoring, and communication is invaluable and will bolster my graduate student skillset. I look forward to every new day as it always brings something exciting.”

GSA and the NPS have partnered on work experience programs since 1997, and Nicole’s geology assistant position is fully funded by donors who have been supporting these efforts through the GSA Foundation for sixteen years. Sally and Bob Newcomb are committed to facilitating important scientific work on challenging, current issues, noting, “The most fun Bob and I have all year is reading the letters from the interns about their experiences, the reports of their activities, and sometimes their publications. A few of the areas addressed by interns in Denali include glaciation, hazard mitigation, river morphology, novel fossils, monitoring fossil access, and visitor education,” and now, the tremendously important work on increasing landslide implications in the park. The Newcombs enjoy keeping up with the interns by attending talks and posters at GSA and reading their reports, and after ten years of consistent funding, they visited Denali to interact with the interns and park staff, explore deep into the park, and learn about the science being done.

Among hundreds of annual participants in SIP and GeoCorps™ America—a similar program partnering with the Bureau of Land Management and the U.S. Forest Service—dozens have gone on to full-time federal employment over the years. If you are passionate about encouraging aspiring geoscientists to conduct important scientific work on America’s public lands, please contact Debbie Marcinkowski at dmarcinkowski@geosociety.org or +1-303-357-1047. General contributions of all sizes make a difference.

Standing at the dramatic edge of the Pretty Rocks Landslide, I watched Nicole’s eyes light up as she described for me in layman’s terms how the rhyolite in the Teklanika Formation contributes to the problematic instability throughout the park, as weathering results in the clay that slides. It was strikingly clear as we stood in this majestic expanse, what compels the Newcombs’ continued commitment, the immense need for scientific work in public lands, and just how much is supported through GSA’s work experience partnerships. 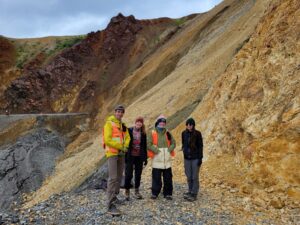 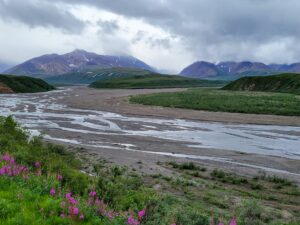 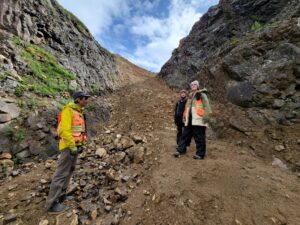 Caption: From left: Park geologist and 2022 science interns at the edge of the Pretty Rocks Landslide and the temporary end of the park road. Braided rivers characterize the landscape of Denali National Park and Preserve. Hiking up a drainage to a new landslide representative of many appearing along the park road. Nicole Benshoff explaining the geology of this kind of slide.