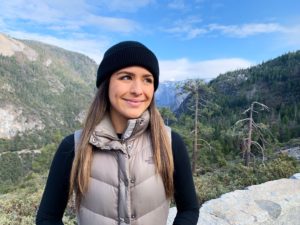 Anahi Carrera’s passion for geoscience was reignited after attending and presenting at GSA Connects 2021 as an OTF scholar.

What was your OTF experience?

Thanks to support from On To the Future, I attended and presented for the first time at a GSA national conference as a graduate student. My presentation was titled “First-Generation College Students Underrepresented in US Geoscience Programs.” I have been interested in Diversity, Equity, and Inclusion outreach and education since I was an undergraduate student. As a low-income, first-generation Latina pursuing higher education, I have faced many obstacles during my academic career. As an undergraduate student, I quickly realized that my geosciences classes were less diverse than most other classes and there was virtually no representation of non-White professors. I found DEI efforts to be extremely necessary and fulfilling, but as I was thinking about graduate school, I believed that DEI could not form a significant part of my work if I wanted to be considered a “serious graduate student.” I thought to myself, “It’s okay if I have to pause DEI work as a graduate student to make progress in my career because most professors will not care about it, and they may think it’s a ‘waste of my time’ and a harmful distraction from my research. My impact is minimal anyway, but once I, hopefully, become a faculty member, I could ramp up those efforts in a more influential way.” I think this exemplifies the effect of historically negative attitudes toward DEI work in the geosciences, the lack of incentives or recognition for this work, and perhaps why many remain completely uninvolved, especially those not from historically marginalized backgrounds.

Thankfully, I met my now Ph.D. advisor, Dr. Emily Cooperdock, who views DEI as an integral part of her work and purposely recruits students who are also interested in these efforts. She has always encouraged me to pursue DEI efforts and is a great role model and example of someone actively working to make the geosciences more inclusive and equitable while also excelling as a scientist. She taught the first-ever DEI seminar in the earth sciences department at the University of Southern California, from which I gained so much knowledge, awareness, and perspective. My final project for the seminar was complementary to the work of another student, Thom Luckie. Emily encouraged and facilitated collaboration between us, which resulted in the work I presented at GSA and we are currently working on a publication. Emily gave us the time and support to do this work since she recognizes the value in it. She motivated me to give an oral presentation at GSA, despite my fear of public speaking, and I am so glad she did.

Attending and presenting at GSA Connects 2021 as an OTF scholar was an incredible experience that has reignited my passion for the geosciences. It helped me realize that so many people are doing incredible DEI work all over the country and are genuinely interested in pivoting the field toward a more inclusive and equitable future. It was also evident to me that GSA does care and does give DEI initiatives and research the importance and respect they deserve. I also had the pleasure of meeting a Latina geoscientist faculty for the first time, Dr. Elena Miranda, who I respect and admire. Her impactful talk was titled “The Leaky Pipeline Playbook: A Critical Look at Gatekeeping Methods That Perpetuate the Disenfranchisement of Women and People of Color in the Geosciences and Some Strategies for Interrupting the Effectiveness of the Playbook Moves.” It was invigorating to witness her strength as she shared the discrimination and barriers she experienced as a graduate student and faculty member in such a raw, non-bureaucratic way. She also outlined tangible strategies to create real change at the institutional level that target the cause, not the symptoms.

At a time when the amount of progress to be done feels insurmountable and change seems to move at glacial speed, these experiences at GSA were encouraging. They gave me hope and made me realize that thanks to advocacy from people like Dr. Miranda, my advisor, and many others, I may not have to suffer as much discrimination and trauma if I pursue an academic career in the geosciences as many people from historically excluded groups before me have. I left the GSA conference feeling more empowered to become an agent of change. Thank you, GSA, OTF organizers, and everyone doing their part to create a more equitable future for the geosciences. Even if you feel like your work is undermined or undervalued in your department or organization, please do not give up!